The AW139 leased by Sazma to perform offshore transport operations brings to 27 the number of Leonardo helicopters procured by ADA to date, further consolidating the partnership between Leonardo and ADA and strengthening the presence of the AW139 in Malaysia and in the world’s energy industry market.

Leonardo, Abu Dhabi Aviation (ADA) and Sazma Aviation Sdn Bhd (Sazma) celebrated the delivery of an AW139 intermediate twin engine helicopter from the Vergiate final assembly line facility on 27th September. The aircraft will be leased by Sazma from ADA to perform offshore transport operations supporting the energy industry sector in Malaysia from Sazma’s base in Kota Kinabalu International Airport, Sabah. If and when required, the helicopter will also carry out VIP transport missions. This is the third AW139 leased from Sazma and brings to 27 the number of Leonardo helicopters procured by ADA to date, most of them being AW139s. 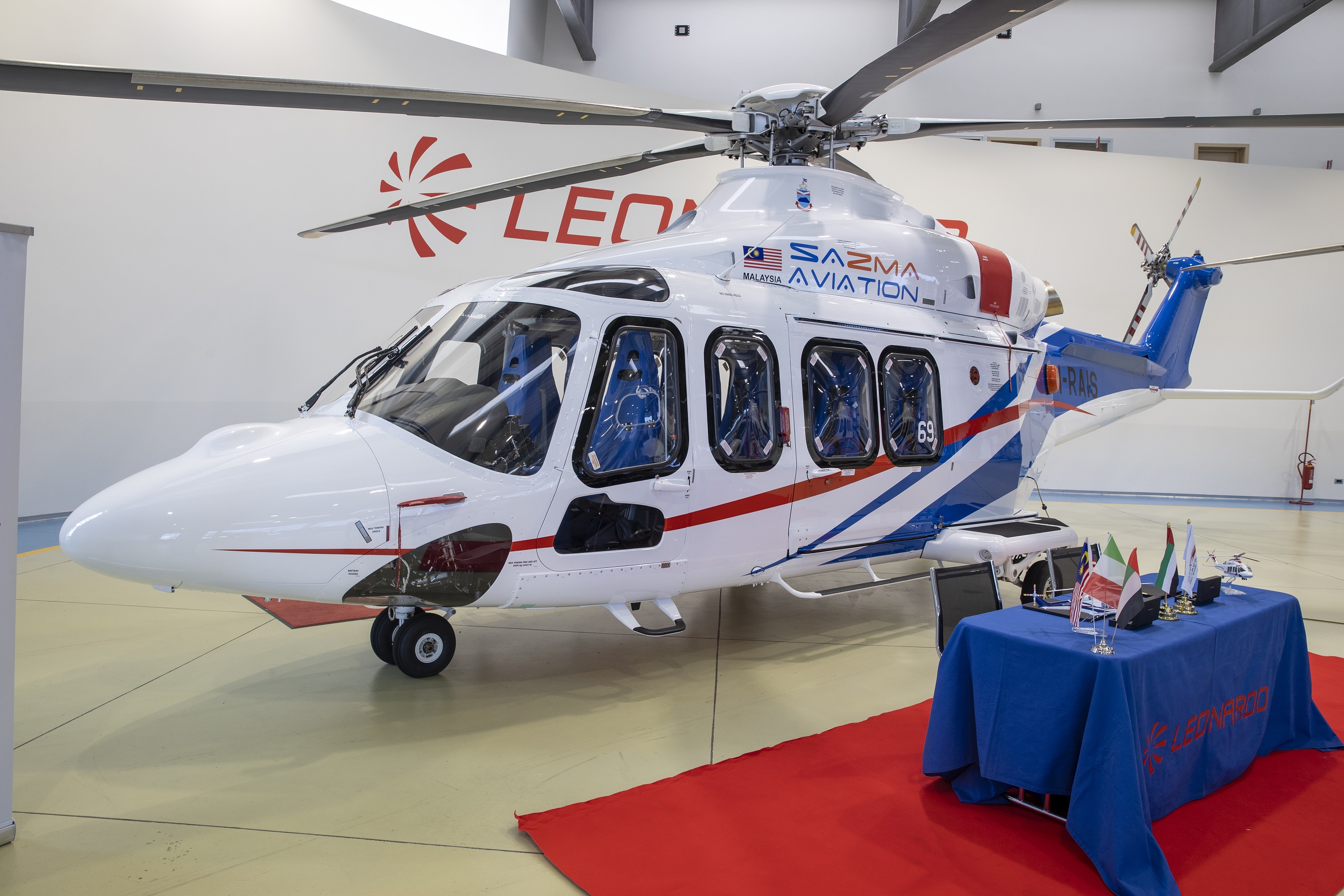 The advanced Synthetic Vision System assists with navigation and landing approaches when operating within challenging terrain, oil rigs, and other demanding scenarios, accomplished via 3D presentation of the external scenario, including surrounding terrain, obstacles, runways and helipads within the background of the Primary Flight Display. A user-friendly 2D Interactive Navigation (INAV) feature showing the helicopter position and flight plan on a map into the Multi-Functional Display (MFD) delivers unparalleled navigation system alignment and precision with the actual flight path taking into account environmental factors. Phase 8 has also wireless connectivity embedded, providing high speed data access for flight plans transfer and maintenance data gathering from the aircraft. Additionally, Custom Approach functionality provides the capability to design, set and fly an automated approach to any user-defined location, including oil rig helidecks.

This delivery further strengthens the partnership between Leonardo and ADA and the presence of the AW139 in Malaysia and in the world’s energy industry market as the benchmark helicopter in its category. Leonardo and ADA have been collaborating for over 15 years and has been extended to comprehensive localized support, maintenance and overhaul services in UAE around 10 years ago with the establishment of the AgustaWestland Aviation Services Joint Venture and training and simulation capabilities afterwards. In more recent years, ADA has also added the latest generation AW169 light intermediate twin, the best possible complement to the AW139 in the light-intermediate category leveraging the unique AW Family advantages with a similar design and latest standards.