Leonardo presented the Cormorant Trophy Award to the Royal Canadian Air Force and US Coast Guard for the successful rescue of 31 survivors from the sinking fishing vessel Atlantic Destiny.

In early October, the Cormorant Trophy Award, which celebrates excellence and bravery in missions, ceremony took place during the Opening Ceremony of Defence Security (DEFSEC) Atlantic event in Canada. During the ceremony, which was attended by 350-400 military government and industry personnel, Dominic Howe, Head of Campaigns - America and Canada at Leonardo, delivered a speech outlining the recent achievements of the Royal Canadian Air Force (RCAF) and US Coast Guard (USCG). 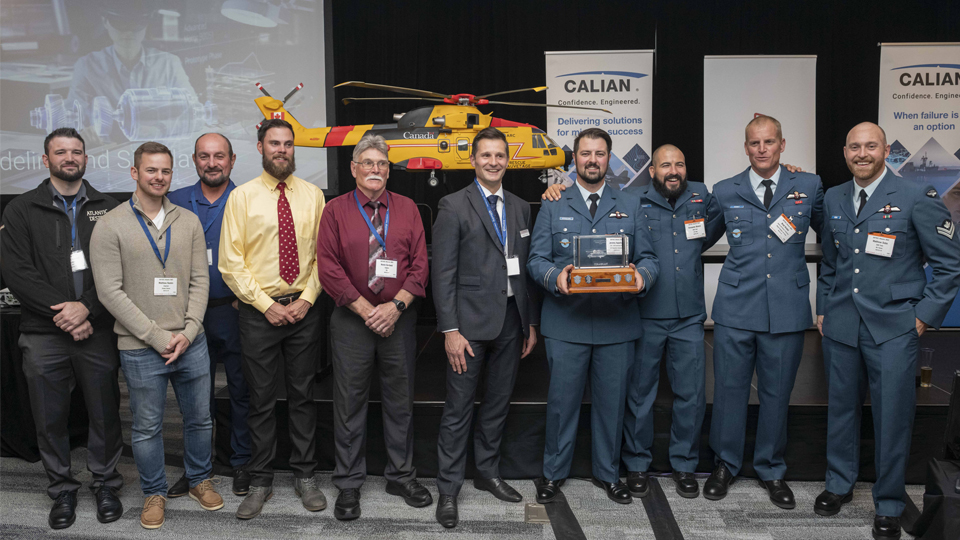 The award was given to both the RCAF and USCG for the successful rescue of 31 survivors from the sinking fishing vessel (FV) Atlantic Destiny; operating in severe weather conditions with extreme shore to on-scene distances, the crew risked their lives to ensure the safety of others.

The rescue mission provides a very real reminder of what we do as Leonardo, producing lifesaving aircraft with incredible rescue capabilities.

At 0000 Zulu on March 3, 2021, the Halifax Joint Rescue Coordination Centre (JRCC) received a distress call from the F/V Atlantic Destiny, which was 125 nautical miles south of Yarmouth, Nova Scotia, on fire, taking water, with 31 personnel on board.

The ship was awash with freezing spray in 4 degree C temperatures, with 40 knot-plus winds gusting to 60 knots and Sea State 7 (6-9 metre waves). A CH-149 Cormorant helicopter (Rescue 907) and CC-130 Hercules (Rescue 343) were dispatched from 413 Squadron at CFB Greenwood and due to the location, the JRCC requested assistance from any available U.S. Coast Guard assets in the area.

Rescue 343 quickly located the Atlantic Destiny, which had lost all power and steering control. A backup generator provided emergency power for radios. The ship’s crew had extinguished one fire in the engine room, but smoke was still visible from a second location. Rescue 343’s crew succeeded on a second attempt in 45 knot winds at dropping a dewatering pump on board to help keep the ship afloat. Rescue 907 arrived on scene just after midnight and began hoist operations in treacherous conditions.

The first Search and Rescue Technician (SARTech) lowered to the ship had to be hoisted back after slamming into the ship’s railing, fearing he was injured. After determining he was OK, he was re-lowered to the ship successfully and was able to secure a guide line and help the second SARTech and a rescue basket down to the deck of the wildly pitching vessel. On the first attempt to rescue two crew members, the hoist cable became entangled in the ship’s rigging and frayed. 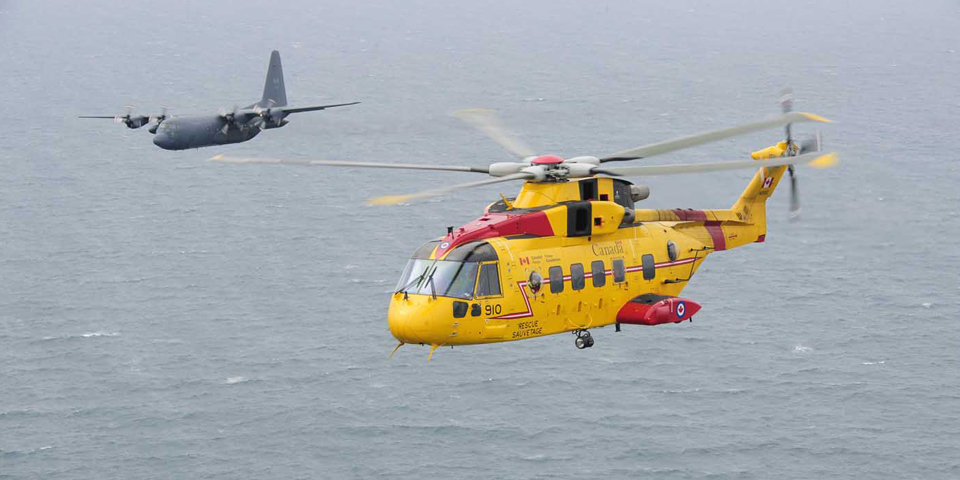 A Canadian CH-149 Cormorant escorted by a CC-130, as on the night the Atlantic Destiny sank into the North Atlantic. Mike Reyno Photo.

The Flight Engineer switched to the second hoist cable and brought the first two crew members on board. R907 made two more extractions for a total of six crew members before a serious flight control hydraulic malfunction forced the helicopter into a “land as soon as possible” emergency.

The second USCG helicopter (CG6039) still enroute, diverted to escort the CH-149 back to land in case it had to ditch in the ocean. With the arrival of the HC-144, Rescue 343 also turned to escort Rescue 907 back to base. An inspection discovered a serious hydraulic leak and the helicopter was declared out of service. Rescue 907’s crew jumped onboard Rescue 343 and returned to the scene provided guidance and advice from the air to the USCG helicopters.

CG6032 lowered a second pump to the ship and with the aid and direction of the RCAF SARTechs on the ship, were able to recover eight more crew members via rescue basket hoists. During the rescues, three of CG6032’s four guide lines were broken or torn out of the hands of SARTechs who were being violently thrown about the deck with each passing wave.

At the end of its on-scene fuel, CG6032 left to refuel in Yarmouth with six rescued crewmembers as CG6039 arrived on scene. CG6039 lowered a third pump and then continued with multiple basket hoists of 13 crew members in continuing dangerous seas, before hitting minimum fuel levels. Escorted by Rescue 343, CG6039 headed for Yarmouth, leaving four crewmembers and the two SARTechs on board.

When CG6039 landed in Yarmouth, authorities said they had exhausted their supply of jet fuel so the two USCG helicopters were unable to return to the scene. A second RCAF CH-149 helicopter (Rescue 904) was dispatched and escorted to the rescue scene by Rescue 343 back to the rescue site. Rescue 343 resumed overhead communication and coordination and CG2313 returned to Cape Cod for fuel.

Unable to recover any crew, Rescue 904 dropped additional supplies to the ship and departed the scene while Rescue 343 remained overhead, informed that the Canadian Coast Guard (CCGC) Vessel Cape Roger was 30 minutes away. In the interim, as it became clear the ship would have to be abandoned, the SARTechs directed the remaining crew to launch life rafts. CCGC Cape Roger arrived and launched a Fast Rescue Craft to recover the remaining four crew and two SARTechs who were able to evacuate the ship using guide lines and rescue slings. The F/V Atlantic Destiny sank just two hours later, with all personnel saved with only minor injuries